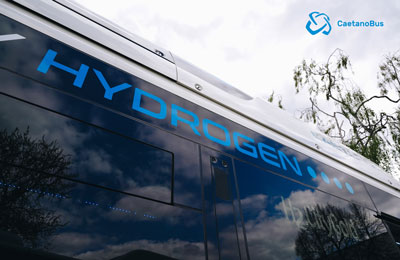 CaetanoBus and Industria Italiana Autobus have signed an agreement to start the production and marketing in Italy of hydrogen-powered city buses based on Toyota Fuel Cell technology and an H2.City Power Kit system developed by CaetanoBus.

By the end of 2022, IIA will initially sell hydrogen buses produced by CaetanoBus, co-branded with Toyota, but from 2024 it will start direct production for the Italian and international markets.

IIA (Industria Italiana Autobus), headquartered in Rome, has production units in Bologna and Flumeri and is controlled by Invitalia, which controls 42.76 per cent of the capital, supported by Leonardo, which holds 28.65 per cent.

CaetanoBus CEO Patrícia Vasconcelos says: “In terms of mobility, Italy is a country that has sought to adopt measures aimed at decarbonising the economy, with a focus on transport in line with current trends in environmental sustainability. IIA is the right partner because we share the same vision aimed at creating a zero-emission society achieved through our joint innovative technologies.”