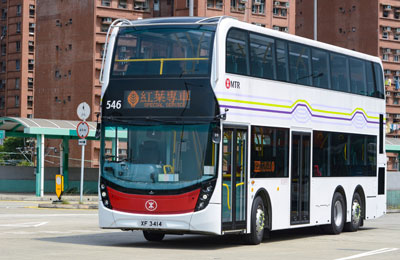 Following an earlier KMB order, Alexander Dennis has taken a second order in Hong Kong for its new Enviro500EV electric double-deck bus, this time for MTR Corporation with delivery in 2023.

MTR provides Hong Kong’s Mass Transit Railway urban rail system including a network of feeder bus services, for which it operates a fleet of 169 buses, most of them being Enviro200, Enviro400 and Enviro500s.

The Enviro500EV three-axle buses, which will be developed in-house by ADL on its own chassis with components from leading industry suppliers,  are MTR’s first electric bus order.

ADL managing director Asia Pacific, Andy Boulton says: “With the next generation of electric bus technology, fully integrated by our own engineers, we are now in a position to deliver a zero-emission solution for Hong Kong’s world class transport system. The Enviro500EV will showcase MTR Corporation’s landmark investment in cleaner transport.”