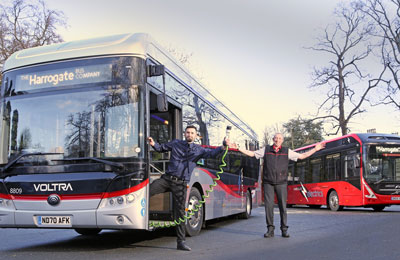 A trial of Yutong’s E10 electric bus is being carried out by north of England bus operator Transdev. This is the second battery-electric bus on trial with Transdev subsidiary The Harrogate Bus Company on its route 1 linking Harrogate and Knaresborough.

The E10, supplied by Pelican Bus and Coach, is being loaned to Transdev by Go North East. The bus is powered by 422kWh batteries and is capable of a 370km range on a single 3.4-hour charge.

The results will be compared with outcomes from a previous trial operation on the same Harrogate bus route of a BYD/ADL Enviro200EV.

Transdev was the first operator in Britain to introduce ‘opportunity-charged’, Volvo electric buses in Harrogate 2018.

Transdev CEO Alex Hornby says: “We’re delighted to begin the second phase of our electric bus trials, as we look ahead to future options for electric power on one of our most popular routes, the 1 between Harrogate and Knaresborough, all to complement the existing zero emission fleet on the local town network in Harrogate.”