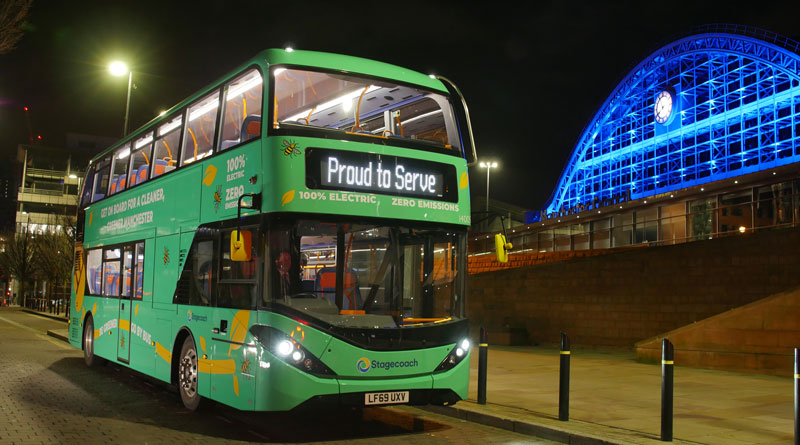 Thirty-one counties, city regions and unitary authorities have been awarded  a share of £150million funding to “level up” local bus services in the latest awards from the Government’s bus transformation programme.

Improvements in a pilot area – Cornwall – will start this month funded by £23.5million from the Government with most bus fares in the county cut. Short hop fares are down by 20 per cent, longer journeys costing up to 40 per cent less and some bus passes cut by almost half. Passes for unlimited bus travel across Cornwall will cost £5 per day (down from £9) or £20 per week.

Transport secretary Grant Shapps says: “Buses are the most popular way of getting around in this country – but for too long people outside of London have had a raw deal.

“The investment we’re making today to ramp up the bus revolution will drive down fares at a time when people’s finances are tight and help connect communities across England.”

The Government has also confirmed that tram and light rail operators across the Midlands and the North will benefit from more than £37million of support, with Manchester (£20.5m), the North East Nexus (£7.3m), the West Midlands (£2.7m), Sheffield (£4m) and Nottingham (£3.3m) all receiving support from the pandemic recovery package.

This money will be used to ensure light rail services continue to run and millions of passengers can continue to get around as the country emerges from the pandemic.

The funding announcement was welcomed by operators and transport organisations but there was an acknowledgment that the details have yet to be made clear, and there are also a number of areas which were unsuccessful with bids that cannot now take forward improvement plans.

Responding to the DfT’s funding announcement, chair of the Urban Transport Group, Laura Shoaf, says: “Although we have yet to see the full details, today’s confirmation of substantial investment in Bus Service Improvement Plans, and in City Region Sustainable Transport Settlements, is welcome and will result in significant improvements in public transport and active travel provision for some of the people and places we serve. We now need to see this package of largely capital spending complemented by a long term plan for revenue support for bus networks which can meet the national bus strategy’s aspirations for better services everywhere.”

Paul Tuohy, chief executive, Campaign for Better Transport, pointed out that only 40 per cent of the authorities which submitted Bus Service Improvement Plans will benefit from a slice of the funding. “Improving buses in a minority of places does not live up to the promise of a national bus strategy, though locally it will be very welcome.

“Rather than this fragmented, competitive way of funding local buses we want to see more of a focus on revenue funding to ensure every community gets the bus service it needs and deserves.”

Operator trade body CPT comments: “Operators are ready to engage with successful local authorities to deliver their joint plans for improvement in bus services as quickly as possible to help deliver important goals such as the drive to net zero and economic growth across the country.

“It is important that we remember though that there will be millions of passengers left disappointed by today’s announcement as their local area missed out on funding. It’s vital that the Government now clearly sets out future funding plans and policy initiatives for delivering its National Bus Strategy, including measures to reduce car use.”

Bus Users also welcomed the announcement of funding to 31 counties but raised concerns for those areas that were unsuccessful in their bids, believing the impact on local communities could prove disastrous.

Dawn Badminton-Capps, Bus Users director for England, says: “This is great news for the 31 local authorities whose bids were successful and we hope those regions see improvements in their bus services as a matter of urgency.

“Many local authorities were unsuccessful, however, despite facing rising costs and falling passenger numbers across their networks. We are at risk of widening the transport gap and leaving communities cut off entirely from employment, education and vital services.”

“For the National Bus Strategy to achieve the levelling-up promised by Government we need more funding being made available to even more local authorities so no community is left behind.”

West Yorkshire Combined Authority – £830m to fund schemes such as the development and delivery of a mass transit network across the region.

South Yorkshire Mayoral Combined Authority – £570m to fund a range of schemes including renewal of the Sheffield Supertram network connecting Sheffield and Rotherham.

Greater Manchester Combined Authority – £1.07bn to fund a range of schemes such as new vehicles to extend the Metrolink network and the creation of walking and cycling corridors across the city region as part of the Streets for All programme.

West Midlands Combined Authority – £1.05bn to fund a range of schemes including 50km of new bus priority lanes across the city region doubling the current amount and Ultra Rapid Charging Transit stations to ensure that local journeys are safer, greener, and cleaner.

West of England Combined Authority – £540m to support the creation of sustainable transport corridors across Bristol and Bath to make bus, cycling, and walking easier and more accessible for all.

Just under two thirds of England’s population outside London will benefit from new investment, including earlier awards of Zebra and CRSTS funding.

Blackburn with Darwen and Lancashire: £34.2m

Cornwall (including Isles of Scilly): £13.3m