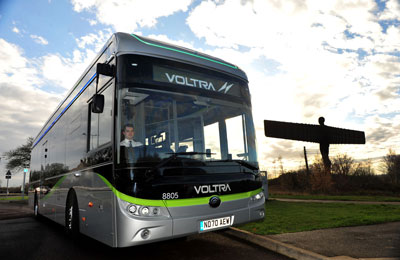 The Go-Ahead Group used last month’s Earth Day to issue a plea to motorists to consider a minor change in their travel habits to make a major difference to the planet. In order to reduce greenhouse gas emissions and improve air quality, Go-Ahead is asking car commuters to consider leaving their vehicles at home just twice a month for the rest of the year and switch their journey to bus, rail or bicycle.

The bus and rail group argues that motorists typically make around 600 car journeys annually. Switching just one in every 25 of these journeys to a bus – equivalent to a couple of trips a month – would reduce the UK’s carbon dioxide emissions by two million tonnes per year.

Saving two million tonnes of carbon dioxide emissions is equivalent to the environmental gain that would be made by switching all the UK’s buses from diesel to zero emission energy sources, such as electricity or hydrogen.

Katy Taylor, Go-Ahead chief strategy and customer officer, says: “Taking public transport is not only the environmental option, it is the best one for our own health and that of our communities. If everyone switched to the bus a couple of times a month, we could collectively rebuild our communities and enjoy the quieter streets from last April while avoiding a car-based recovery from the pandemic.”

Private cars account for 55 per cent of greenhouse gas emissions from transport. Buses and coaches account for around 3 per cent of emissions, and one double-deck bus has the potential to take up to 75 cars off the road.