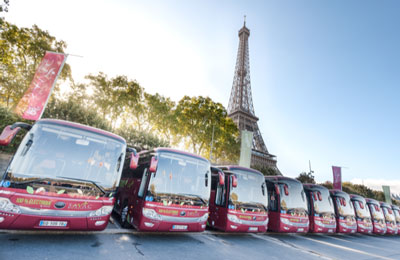 The Go-Ahead Group and Groupe Lacroix & Savac have entered a strategic partnership to explore opportunities to bid together for public transport contracts in France. Under the partnership, the two companies will target the market for bus services in and around Paris, where the city authorities have begun a process of putting routes out to tender as state-owned Epic RATP will lose its Paris bus monopoly in 2025.

Christian Schreyer, group chief executive, The Go-Ahead Group, says: “Go-Ahead’s strength lies in running busy commuter transport services, and a key part of our strategy is to explore new opportunities in bus and light rail. With an outstanding track record and deep local knowledge, Lacroix Savac is the perfect partner for us to work with in France.”

Stéphane Guenet, president, Lacroix & Savac, adds: “This partnership will allow us to benefit from Go-Ahead’s expertise in mass transit and in entering urban areas that are newly open to competition. This will help us to adapt our offering for the Paris and suburban bus networks, which will be operated on behalf of Île-de-France Mobilités”.

Lacroix & Savac Group claims to be the leading independent player in public passenger transport in Ile-de-France, with a turnover of around €200million and 2,200 employees.It was created from the merger of Ile-de-France operators Savac and Lacroix.