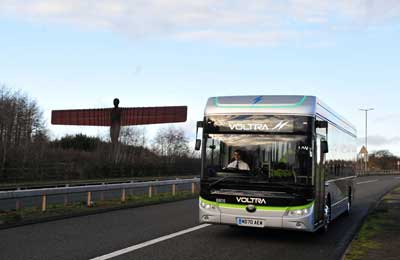 The Go-Ahead Group has received its highest accreditation yet for commitment to reducing its carbon emissions. The bus and rail operator received an a “A-minus” grading from CDP (Carbon Disclosure Project).

Since 2016, Go-Ahead has achieved a 22 per cent absolute reduction in group-wide carbon emissions.

This includes a period in which the company has expanded into Germany, Norway, Singapore and Ireland.

Go-Ahead said the ‘beast from the east’ storm that swept across Britain in February 2018 prompted a review of its strategy towards climate change as it recognised the impact of increasingly common severe weather incidents on both rail and bus services.

Go-Ahead is already the UK’s largest provider of electric bus services, and the operator of Britain’s first all-electric bus garage in Waterloo, London. It has also committed to run a zero-emission bus fleet by 2035 and has launched a new fleet of electric buses in the north-east of England.

All the group’s UK premises – including rail stations and bus depots – are powered by zero carbon electricity generated from fully renewable sources, such as solar, wind and hydro power. The amount of electricity that was generated through solar power increased by 490 per cent from the financial year 2017/18 to 2018/19.

The group has introduced incentives for employees to contribute towards carbon reduction, including cash bonuses for bus drivers who conserve fuel as measured by a telematics system, and a prize of an electric car at Go-Ahead London for the employee with the best energy-saving idea.

“Public transport is part of the solution in addressing climate change and poor air quality,” says Go-Ahead chief strategy and commercial officer Katy Taylor. “The ‘Beast from the East’ was a wake-up call to much of Britain on the impact of climate change. We’re delighted that the CDP’s ranking reflects our commitment to contribute to a cleaner, greener world.

“As a responsible business we will continue to investigate solutions for cutting our carbon footprint even further.”

Any cookies that may not be particularly necessary for the website to function and is used specifically to collect user personal data via analytics, ads, other embedded contents are termed as non-necessary cookies. It is mandatory to procure user consent prior to running these cookies on your website.