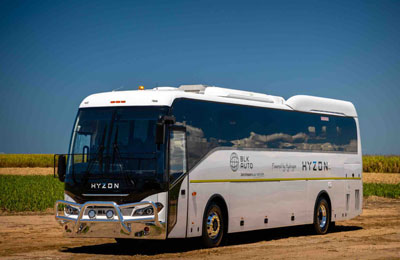 US manufacturer Hyzon Motors has unveiled its first zero-emission, fuel cell coach in Brisbane, the first fuel cell coach in Australia. Imported by BLK Auto, the coach seats 50 passengers and boasts a range of up to 430 miles and a 350kW motor. It is the first of a 10-coach order to be supplied to Australia with the remaining nine vehicles in advanced stages of production.

Before delivery, the coach successfully completed a 9,300-mile durability test. The initial coaches are designed to meet Australian standards, which include a right-hand drive configuration and a design temperature of 55 degrees C. Hyzon plans to offer similar coaches to customers globally from next year.

Hyzon believes the coach market is right for hydrogen-fuelled vehicles, pointing out that they offer refuelling times similar to traditional diesel-powered coaches and suitability for longer-haul public and private transit routes.

Hyzon has set itself a goal of developing a coach with a 500-mile range.

The initial Hyzon Australia vehicles will be imported into Australia but Hyzon expects to localise production of key platforms from 2022. Hyzon has its headquarters in Rochester, NY, with US operations in Chicago and Detroit, and international operations in the Netherlands, Singapore, Australia, Germany, and China.