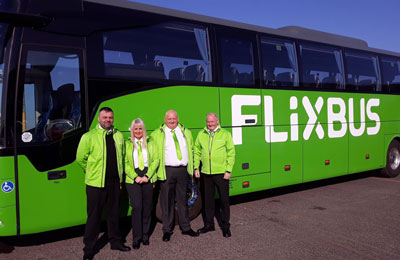 FlixBus is adding a new route to its network in partnership with McGill’s, the largest privately owned bus company in the UK. The new route will run ten times a week between Manchester and Glasgow, stopping at Preston and Lancaster. There will also be additional connections to Birmingham and improved access to Scotland, alongside the west coast of England.

Andreas Schorling, managing director, FlixBus UK, says: “McGill’s has been a consistently strong partner, with their driving team delivering a solid, high quality service. This new route marks a significant milestone in our relationship and cements our commitment to Scottish-based coach travel.”

Colin Napier, operations director, McGill’s, adds: “Our first long-distance routes in partnership with FlixBus have proved to be a terrific success, with passenger numbers and feedback both being very positive. That is testament to the quality service being provided by team members and we’re excited to be able to expand the routes offered.

“Working in partnership with FlixBus has proved even more fruitful than we could have anticipated. Their bold growth targets and sustainable values align directly with ours, and we’re looking forward to being a key partner on the FlixBus network as passenger numbers continue to grow.”

FlixBus also announced a new partnership with Berrys and Roselyn Coaches who will operate routes to the south west of England.

A new Plymouth to London route, calling at Exeter, Taunton and Bridgwater, runs daily, with trips increasing over the summer months to meet expected high demand. FlixBus’ and Berrys’ relationship began in July 2021, with some Berrys connections available to book via FlixBus’ channels. This service will continue, but the companies have also agreed a closer partnership, with Berrys Coaches expanding their fleet to become part of the green FlixBus network and the new route will be supported by Roselyn of Cornwall coaches.

“We’re committed to creating a high quality, UK-wide network, and we are now offering routes to nearly 40 locations across England, Scotland and Wales with the help of our brilliant bus partners,” adds Schorling.