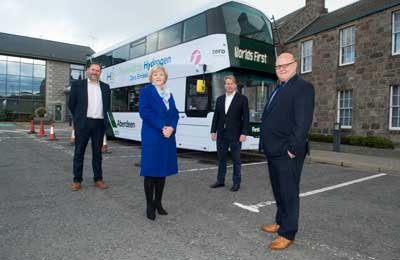 The first hydrogen-powered double-deck bus has been revealed in Aberdeen, underlining the city’s commitment to the transition of green energy from oil and gas as part of a net zero vision.

The Wrightbus hydrogen double-decks will be doing a period of final testing along with training for drivers before going into service next month. The buses are claimed to be as efficient as electric equivalents, with refuelling taking less than 10 minutes while offering a greater range. Water is the only emission from the vehicles which reduces carbon emissions and the new buses contribute to the city’s commitment to tackling air pollution.

The UK’s first hydrogen production and bus refuelling station was opened in Aberdeen in 2015, as part of a £19million green transport demonstration project. The Aberdeen City Council-led project tested the economic and environmental benefits of hydrogen transport technologies and aims to drive the development of hydrogen technologies.

Aberdeen city council co-leader Jenny Laing says: “We are very proud to bring the world’s first hydrogen-powered double-deck buses to Aberdeen as it shows the city continues to be at the forefront of developing green technologies.

“The roll out of the new double-deck buses will help to cement Aberdeen’s position as an entrepreneurial and technological leader as the new buses come with even more advanced technology which pushes established hydrogen boundaries and  greatly assists us in tackling air pollution in the city.”

Jo Bamford, Wrightbus owner and executive chairman, adds: “We’re immensely proud to be putting the world’s first fleet of hydrogen double-decks onto the streets of Aberdeen.

“These buses represent much more than Aberdeen striving to reach a clean air, zero-carbon future. They represent the start of what could be a world-leading hydrogen economy here in Scotland which will bring with it multi-million pound investments and tens of thousands of jobs.”

First Aberdeen will run the 15 buses along one of its most popular routes.