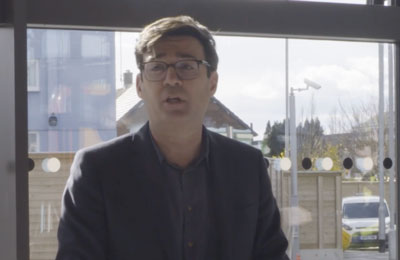 The mayor points out that Greater Manchester will be the first city-region outside London to have buses that are under local control since deregulation nearly 35 years ago, and locally elected politicians will direct routes, frequencies, fares and tickets. By the end of 2025, Burnham’s plans will see Greater Manchester Combined Authority being able to fully integrate buses with the rest of the region’s transport network.

The mayor argues that with buses under local control, Greater Manchester leaders will be able to connect people by public transport to work, home, education, culture and leisure, and bus franchising means GMCA can set environmental standards for a cleaner, greener bus fleet, helping to meet the city-region’s targets to tackle the climate emergency and reduce harmful emissions.

Franchising is set to be introduced in phases, with the first franchised buses planned to run in Bolton and Wigan in early 2023 and the move to a fully franchised system across the whole of Greater Manchester by the end of 2025. In the period up to full transition, GMCA and TfGM will work with central government and bus operators to plan and improve bus services to best support Greater Manchester’s economic recovery.

“In Greater Manchester, we’ve always done things differently and been trailblazers especially in the field of transport; we had the first passenger railway; the first ‘bus’ route with a horse-drawn carriage and now I’ve decided that we will be the first outside London to run our buses differently – under local control, so that decisions are made at a local level for the benefit of our passengers.

“Bringing buses into local control will be the biggest change to Greater Manchester’s buses since de-regulation in 1986. But as with all change for the better, it will take time; it won’t happen overnight and we are just at the start of our journey.”

Of course, there are plenty who continue to criticise the policy including bus operators with significant current stakes in running buses in Greater Manchester.

Stagecoach is aiming to see GMCA in court as it seeks a judicial review of the consulation process that it claims “has failed to meet the standards on proper process, evidence and analysis required by law”.

In a statement released in response to the mayoral announcement, Stagecoach Group said: “The planned franchising scheme in Greater Manchester would incur £135million of transition costs that would not deliver any new buses or new services and, under GMCA plans, would see above-inflation fares increases for customers. We believe a better approach in line with the government’s bus strategy would be to work together and focus precious taxpayer funding on practical improvements for customers and local communities.”

Meanwhile, Go North West, which was established in Manchester during a period when it was known that the bus franchising system was very much on the cards, set a more cooperative tone in its response: “Go-Ahead Group operates buses in a wide variety of regulatory environments across the UK. We are liaising with Transport for Greater Manchester on creating a system that works best for passengers.

“Arrangements for a smooth transition will be needed, and we have suggested that as an interim step, TfGM and all operators come together to create a partnership to rebuild passenger numbers after the COVID-19 pandemic.”

Unite gave an unreserved welcome for the announcement by Andy Burnham that Greater Manchester will adopt a system of bus franchising. The union says that the new system “will dramatically improve the quality of services and increase regional connectivity”.