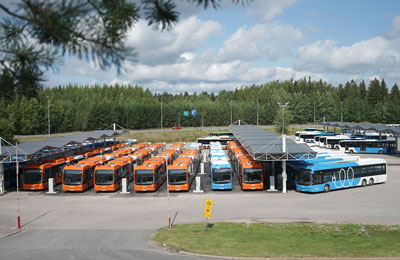 BYD has delivered an additional 76 BYD eBuses to Nordic operator, Nobina, for use in the Finnish capital, Helsinki. The delivery completes an order for 119 buses, Finland’s largest electric bus order, and follows the arrival of the initial batch of 43 to Turku in June.

The new Nobina fleet includes BYD’s latest 15m city eBus that had its European debut in Turku. The operator is also receiving a range of eBus models, including 23 units of the best-selling 12m model, eight units of the updated 13m variant and 44 high-capacity 18m articulated buses.

Representing more than half of the buses delivered to Helsinki, the 18m articulated eBus boasts a spacious interior capable of carrying 112 passengers and can charge up to 300kW through a roof-mounted pantograph. In line with the units delivered to Turku, Helsinki’s 15m eBus offers a 47+3 seating capacity and a total passenger capacity of 90 passengers. BYD says its latest generation iron-phosphate batteries fitted to the 15m eBus can deliver a single-charge range of 400km under SORT test conditions.

All of Nobina’s new 12-metre eBuses feature a tailor-made seat layout capable of carrying 72 passengers and were built at BYD’s production facility in Hungary.

BYD has nearly 600 vehicles either delivered or on order with public transport operators in more than 20 towns and cities throughout Scandinavia. Collectively, BYD vehicles in Sweden, Norway, Denmark and Finland have covered more than 25 million km, resulting in a 27,000-tonne reduction in CO2 emissions.

Petri Auno, managing director, Nobina Finland, says that from mid-August, Nobina will be the biggest electric bus operator in Finland, with more than 110 BYD full electric buses working across the Turku and Helsinki regions: “I am happy and proud of this achievement. We have had an extremely tight timeframe to deliver the buses and to build the infrastructure ready for operations to begin. With 100 per cent commitment from all the parties, we have been able to hit this most challenging of targets.

“Although this is a big step for Nobina, our passengers and for the PTAs in Finland, this is only the beginning. By this time next year, our ambition is to double the number of electric buses operated by Nobina in Finland.”

BYD Europe managing director Isbrand Ho adds, “Nobina has historically been quick to embrace electric bus technology and our successful co-operation with the operator is allowing us to reach new cities and countries.

“Despite the significant challenges brought about by the Covid-19 pandemic, BYD was able to complete this eBus delivery on time.”