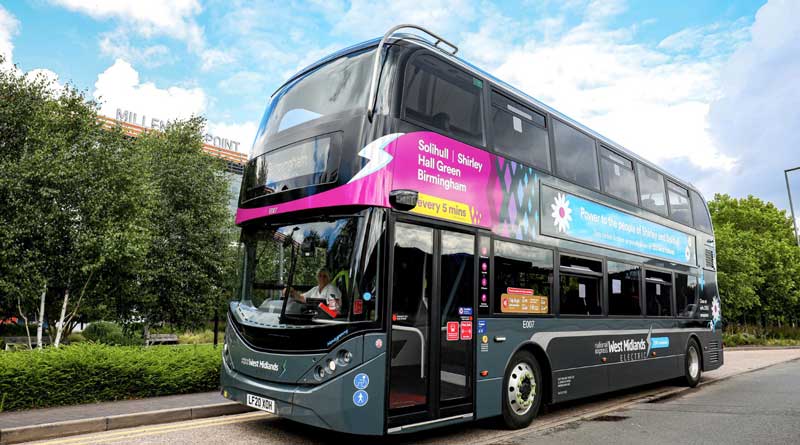 Alexander Dennis and BYD Europe have supplied the first of 29 BYD ADL Enviro400EV double-decks to National Express West Midlands. The buses will be charged entirely by renewable energy and utilise a stationery battery system to balance the load on the electricity grid.

A new heat pump system ensures that saloon heating power is supplied efficiently from the main batteries without undue impact on operational range.

The first 19 of these zero-emission buses have now entered service in Birmingham, where the operator’s 80-year old Yardley Wood garage has been retrofitted with plug chargers for each bus along with a stationery battery, provided by Zenobe Energy, that balances the load on the grid.

Ten further vehicles will be introduced in Coventry in the autumn. The investment has been supported with a £3million grant from the UK Government’s Office for Low Emission Vehicles.

“At National Express, zero- emission is not the future – it’s the here-and-now,” says Tom Stables, managing director, National Express UK. “Our bus fleet will be zero emission by 2030, and we’re very proud to bring fully-electric buses to the people of the West Midlands.”

Colin Robertson, ADL chief executive, adds: “National Express has taken the decision to never buy another diesel bus, the first UK bus operator to do so. We have worked in close collaboration with National Express West Midlands and our partner BYD to ensure that these first 29 electric buses are a great start into a zero-emission future for Birmingham, Coventry and the wider West Midlands.”

The BYD ADL Enviro400EV was launched just over a year ago and more than 250 have been sold to date with two thirds of them already in service in UK cities.