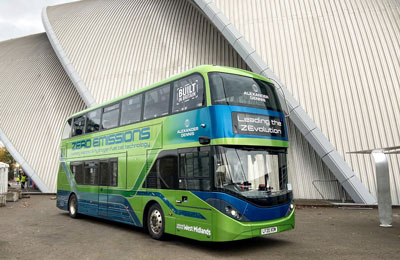 First Glasgow is operating the shuttle service for COP26 delegates between city centre and the Blue and Green zones using its new fleet of ADL/BYD electric buses, which were part-funded through Transport Scotland’s SULEB scheme.

Duncan Cameron, interim managing director, First Bus in Scotland says, “First Bus Scotland are delighted to have been chosen to operate the official COP26 shuttle service and will be working closely with SPT, Transport Scotland and the cabinet office to ensure a smooth and efficient service can be delivered for all delegates attending the event.

“As leaders in sustainable mobility, we are fully aligned with the Government’s ambitions for a net-zero carbon transport system, including zero-emission bus fleets. We have already committed to achieving this by 2035 and we look forward to showcasing this to delegates over the course of the event.”