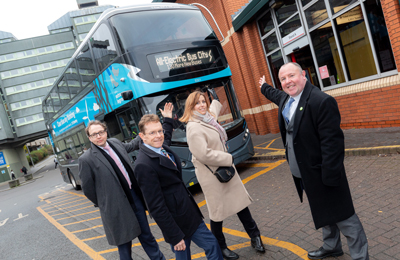 A fleet of 130 zero-emission double decker buses will be introduced next year as part of a £140million project to make Coventry the UK’s first all-electric bus city. National Express Coventry has ordered the zero-emission buses to enter into service in early 2023.

Last year Transport for West Midlands secured £50 million funding from the Department of Transport to ensure every bus in Coventry is zero-emission.

Under a deal with TfWM, National Express Coventry is making an additional multi-million pound investment into the All Electric Bus City project with the purchase of the 130 new buses. The company is set to order further buses at a later date.

Similar agreements with other bus companies and those running subsidised services are likely to follow, with the aim of putting up to 300 electric buses on the streets of Coventry, guaranteeing an all-electric fleet by 2025.

Andy Street, mayor of the West Midlands and chair of the WMCA,  says: “It really is incredibly exciting to think next year we will have 130 all-electric buses on the streets of Coventry thanks to the deal we have signed with National Express.

“These clean and green double-decker buses will not only be fantastic for passengers with their comfort and state-of-the-art technology, but it will also help in reducing air pollution and tackling the climate emergency.”

David Bradford, managing director, National Express Bus, adds: “Ten of our existing electric double-decker buses have already driven over 850,000 miles and saved 1,400 tonnes of carbon dioxide from going out into the atmosphere. Hundreds more of these zero-emission buses are now on their way. It is really great news for Coventry residents and visitors.”