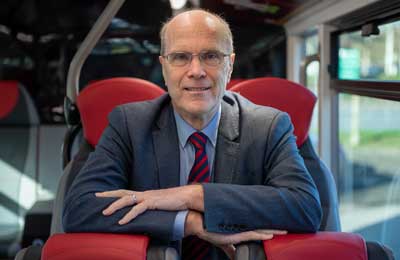 In 1991, Fearnley led a management buy-out of Blazefield Holdings and remained as chief executive for two years following the group’s sale to Transdev in 2006. In the mid-1990s he moved to the rail sector and was one of the founders of Prism Rail, which operated four UK passenger rail franchises, and led that group prior to the sale in 2000 to National Express. He then served as chairman of Grand Central, the open access rail operator, prior to its sale to DB in 2011.

Bell was previously chief executive officer of P&O Ferries. Having joined them in 2012 as commercial director, she became CEO in 2018. She started out at Tesco, where she was a graduate trainee, before becoming a consultant at PricewaterhouseCoopers, and has also worked with Hammerson plc and Centrica. She has an MBA from the University of Stirling and completed her undergraduate degree in Biochemistry from Warwick University.

Fearnley says: “It has been a great privilege to lead First Bus for approaching ten years. With the recent advances we have made in our innovative customer offering; strong partnership working with local authorities and now with our roadmap to a zero-emission fleet in place, it is the right time for me to retire and hand over to Janette who, with the help of our dedicated and hard-working team, will ensure that First Bus maintains its critical role in our communities for years to come.”

Janette Bell adds: “I’m delighted to be joining First Bus and excited about the opportunities that lie ahead. I know there is a bright future for the high-quality, low-carbon services that we bring to communities across the UK.”