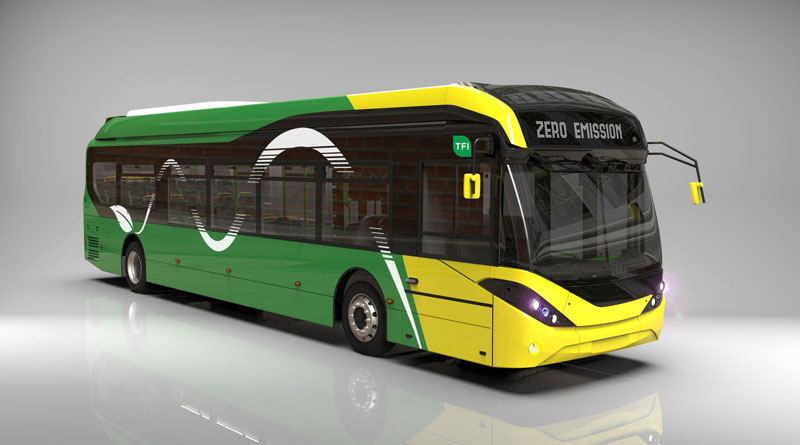 An obvious question about the UK government’s much-repeated objective of seeing 4,000 new zero emission buses over the next four years is, where will these vehicles be built? Will it mean more imported vehicles, or does this offer the potential to boost UK production as well as clean up emissions?

ADL president and managing director Paul Davies is unashamedly waving the ‘Built in Britain’ flag as he aims to persuade government to prioritise UK manufacturing. “We shouldn’t be embarrassed about asking for that money to be spent locally,” he says. “It’s a huge opportunity to do the right thing and to support manufacturing jobs and the wider supply chain.”

ADL employs around 1,700 in the UK and points to estimates that, in addition to the direct manufacturing workforce, the supply chain for the whole bus manufacturing sector brings the total number of jobs in the country to around 7,000.

Of course, ADL does have a significant partner in its ‘ZEvolution’ with the Chinese-built BYD electric chassis underpinning an impressive UK sales record of 500 electric buses in service plus 500 on order. There are plans from ADL and BYD in progress to carry out more localised chassis production here in the UK, but the beating heart of the electric bus, the batteries and electric powertrain, will continue to be imported from China for the foreseeable future.

The original plan was for electric bus chassis manufacturing to be switched to ADL’s UK plants this year, but strong levels of current demand has meant that this is now more likely in early 2022, according to Davies.

And ADL is also building in Britain for export with the substantial order of 198 Enviro500s for Berlin’s BVG being one example. These are diesel-powered rather than EVs, but they are helping to maintain work at ADL’s Scarborough facility, the home of Plaxton coaches which is being repurposed to focus almost exclusively on the BVG order while the new coach market remains moribund. Davies says that there is enough ready-built Plaxton coach stock to meet the low levels of current demand, so it makes sense to focus the production lines at Scarborough on buses for the time being.

There are changes elsewhere in ADL’s footprint around the UK with a new engineering and development facility about to open in Farnborough. The plant will be named Trident House to reflect the association with the Dennis name, and appropriately it is also likely to house a museum with exhibits reflecting the history of the brand. The Farnborough base will deploy expertise from the nearby former Guildford plant which was closed last year.

ADL also seized an opportunity across the Irish Sea following the collapse of Wrightbus in 2019 to scoop up some of its former talent and has established a small engineering centre in Ballymena with 19 staff.

Although both the Alexander and Dennis marques have a long history of association with the UK bus market, international sales have been a critical element of maintaining ADL’s growth over the past decades. And Paul Davies’ background gives him a distinct advantage in that sphere, having been leading ADL’s growth in the Asia Pacific market for the past 20 years after relocating to Hong Kong in 2000.

Over that period, ADL has maintained a dominant position in the Hong Kong bus market with its Enviro500, and built new markets in Singapore, Malaysia and New Zealand, as well as establishing assembly operations in Malaysia and China.

The latest developments in the region include new deals to localise assembly of Enviro200 EVs in both Australia and New Zealand with partners Nexport and Kiwi Bus Builders.

And across the Atlantic, North America is a strong success story with around 1,200 ADL double-deck buses now operating there, and the recent launch of the Enviro500EV Charge as the first zero emission three-axle double-deck targeting the next phase of growth.

The North American electric bus has a powerful 648kW battery which you might expect would give it a much longer range than the UK variants, but ADL points out that the significant load from the essential air-conditioning means it will be roughly on a par in terms of daily range. The first examples are being deployed on commuter services to Los Angeles by Foothills Transit and ADL reports strong interest from transport authorities in Seattle, Portland, Spokane and San Francisco.

Closer to home, ADL has reinforced its position in Ireland with a new deal with the National Transport Authority for up to 200 Enviro200EVs with an initial firm order for 45 which will go to Dublin and Athlone. This order follows the earlier deal for 100 Enviro400ER hybrid buses as part of a framework agreement for up to 600.

The bespoke nature of bus manufacture is clearly evidenced in the NTA order with the need to adapt to Irish requirements leading to a restyling of the Enviro200 front to include a raked windscreen as well as multiple interior layouts.

The large hybrid order in Ireland raises a question of whether there is still potential for that variant given the growing dominance of full-electric buses. “I would be surprised if there was a massive market in hybrid,” responds Davies, pointing out that ZEBRA funding in England does not include hybrids and therefore the focus remains on zero emission vehicles.

Given the need to satisfy its customer base, ADL remains committed to a ‘technology-agnostic’ approach, and is willing to provide a solution that each customer wants.

But beyond some notable, but potentially modest interest in hydrogen buses at present, it is likely that BEVs will remain the number one zero emission choice, especially given the need to deliver the sorts of numbers that the UK government’s ambitions call for in just a few years.

Davies believes that range-anxiety regarding electric buses is now misplaced, since he estimates that current models can now meet more than 80 per cent of the operational requirements for UK operators, and only a small number of routes may need an additional boost.

The ADL boss declines to put a date on when it would be feasible to end the sale of new diesel buses, but it is clear that his focus, and all of the company’s new product development is firmly targeting a zero emission future.