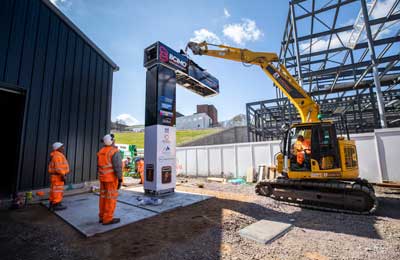 The world’s first Very Light Rail (VLR) ultra-rapid battery charge station has been delivered and installed at its dedicated testing centre in Dudley, England, by Furrer+Frey.

The charge station is part of a multi-million-pound project to develop Coventry’s Very Light Rail system, bringing the benefits of a tram at a fraction of the cost, with the potential to use chargers for trams and buses within an integrated network.

The Furrer+Frey All-In-One OpBrid charger is already in use for electric buses in Sweden, Spain, Canada, and the Netherlands. New software developed by the Swiss firm’s British arm means the charger can support new light trams as well as buses.

The first VLR services could be running in Coventry by 2025.

Simon Phipps, Dudley Council cabinet member for regeneration and enterprise, says: “The VLR project is one of many regeneration projects that place Dudley borough at the forefront of technological innovation.

“Dudley will be the first area in the UK to trial this ultra-rapid charge station and it’s one example of our ambition to develop cutting edge innovations.”