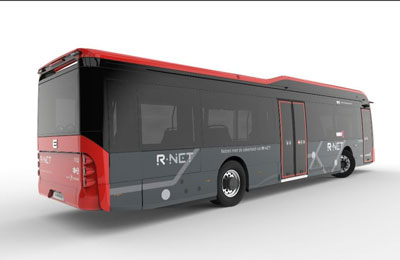 Ebusco is to supply the first composite, electric buses in The Netherlands. Transdev Nederland has ordered 39 Ebusco 3.0 buses for city and intercity routes in the Gooi and Vecht region.

Transdev Nederland will operate the 39 buses from April 2022 onwards which will travel an average of 110,000 km per year.

Ebusco says its 3.0 bus is 100% sustainable since it is made from composite instead of steel which means it is 25 per cent lighter than regular city and intercity buses giving it lower energy consumption and a claimed range of 575km on a single charge.

Each bus is estimated to reduce CO₂ pollution by approximately 1 kg per km driven which should lead to a reduction of more than 30 million kg CO₂ over the contract period.

The Ebusco 3.0 has been produced in Deurne in The Netherlands. The Ebusco 3.0 prototype was introduced in October 2019 and Transdev Nederland will be the first to put it into service in its home country.

Peter Bijvelds, CEO, Ebusco, says: “We believe the LFP-technology battery used on these buses is the best and safest battery on the market. Thanks to the combination of all the innovations we apply, these buses can travel up to 575 km on a single charge, which is truly unique for a bus”.