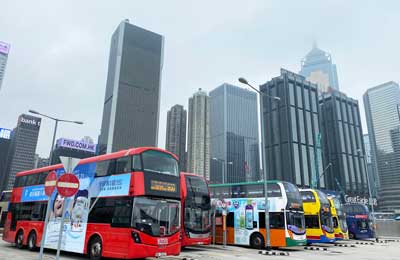 The arrival of new ADL Enviro500 three-axle double-deck buses to the Hong Kong franchised fleets during 2020 has taken the Cummins L Series engine population up to an in-service record high of 4,500 buses in the territory. Built at the Cummins Darlington UK facility, the 8.9-litre engine has proven to be a robust performer in Hong Kong, operating for up to 20 hours daily on both city and rural routes, together with high-speed airport express services accumulating up to 200,000 km per year.

The latest Enviro500 three-axle double-deck buses specified for Hong Kong, feature a Euro VI L9 engine. Rated at 340hp and with 1,500Nm peak torque at 1,200rpm, the Cummins L9 enables smooth, quiet operation when fully loaded with over 140 passengers. The high power density of the L9 provides generous levels of power-take-off for the heavy air-conditioning required in Hong Kong, according to Cummins, and a variable geometry turbocharger ensures rapid engine response for vehicle acceleration.

Hong Kong has the largest number of three-axle double-deck buses in the world, with more than 600 routes operated by the bus network, undertaking over 4.2 million passenger journeys every day. Cummins powers almost 70 percent of the double-decks operated by the franchised bus fleets.

The Cummins 8.9-litre engine can also be found powering Ankai sightseeing buses operating around the territory.

“Hong Kong presents an arduous bus duty-cycle with very high passenger loadings, a humid climate and steep gradients to climb, but Cummins L Series engine has proven to be more than equal to the task and we are delighted to reach a landmark population of 4,500 double deckers during 2020 in partnership with ADL,” said Ashley Watton, Cummins Director, bus business Europe.

“The L9 shares many heavy-duty design attributes such as the XPI fuel system with larger displacement Cummins engines, delivering premium performance but with the lower operating costs and fuel-efficiency of a compact, midrange engine.”