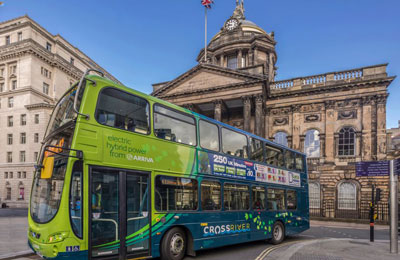 Liverpool city council has approved a plan to deploy £3.3million from the DfT to convert the engines of 200 buses, as part of a programme to improve Liverpool’s air quality.

The decision comes in the wake of Liverpool’s draft Clean Air Plan, which aims to bring down kerbside NO2 levels in the city to below the national target of an annual mean concentration of 40 mg per m3.

Poor air quality is a proven contributory factor to respiratory problems, and Liverpool has among the highest rates of child asthma and lung cancer in Europe.

The current Covid-19 pandemic has illustrated the city’s respiratory issues with Liverpool recording one of the highest death rates in the country.

In a bid to further comply with national air quality standards, the council’s cabinet has also approved a plan to launch a public consultation over the summer for the potential introduction of a city centre charging Clean Air Zone. Formal conversations with major stakeholders in the city region will now begin to explore the economic, environmental and health impacts of a charging CAZ – and the class of CAZ that might achieve the best balance.

The city council, which declared a Climate Emergency in July 2019, has already begun to implement cleaner, greener measures such as de-carbonising its own fleet of vehicles. It now claims to have the largest low-carbon refuse fleet in the UK and has installed more than 120 electric charging points across the city.