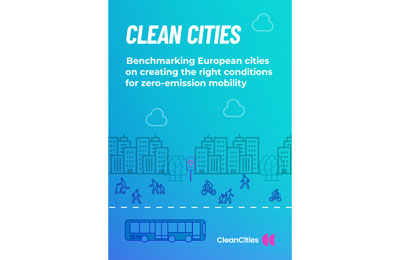 A report which highlights public transport affordability in UK cities has been called “a wake-up call for the UK government,” by Campaign for Better Transport.

The Clean Cities: Benchmarking European cities on creating the right conditions for zero-emission mobility report, ranked 36 European cities by how much progress they are making towards achieving net zero mobility by 2030, based on measures ranging from more space for walking and cycling to road safety and policies to phase out polluting cars.

When ranked by affordability of public transport, London came 36th, followed by Manchester (35th) and Birmingham (34th). The three cities are bottom of the table with residents being asked to fork out 8-10 per cent of their household budget on monthly travel costs.

By contrast, in Oslo, which came top overall in the report, passengers spend just two per cent of their household budget on public transport fares.

Campaign for Better Transport is calling for more action from central government to make buses and trains affordable, pointing out that helping more people to use public transport is essential to tackling air pollution and traffic congestion in cities, as well as meeting net zero targets.

“This report makes clear the link between the cost of public transport and efforts to decarbonise transport and must therefore act as a wake-up call for the UK Government,” says Paul Tuohy, chief executive, Campaign for Better Transport. “We currently have a situation where it is often cheaper to drive or fly short distances than take the train or the bus, whereas the greenest option should always be the cheapest. We need more affordable public transport to help us achieve the government’s vision where public transport, cycling and walking are the first choice when it comes to transport.”

Oliver Lord, UK Head of Clean Cities Campaign, which produced the report, adds: “The only way to address our air pollution and climate crisis is to ensure public transport is a cheap, reliable and accessible alternative to the car. Our new report shows that UK cities have the least affordable public transport in Europe, which will inevitably get worse given this government’s decision to increase fares in a cost of living crisis. This government should be helping, not hindering, our cities to play their role in meeting the UK’s clean air and climate goals.”

Campaign for Better Transport is calling for the UK government to:

Tuohy says: “We are running out of time to tackle the climate crisis. Transport is still the biggest single emitter of carbon in the UK. The government must do more to get people using public transport by making it more affordable and encouraging its use.”