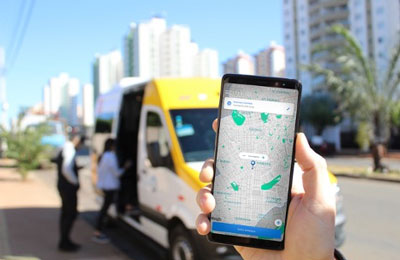 CityBus 2.0, the first on-demand public transport service in Latin America, has celebrated one year of service in Goiânia and claims to have eliminated 64tonnes of CO2 emissions due to its ride-sharing approach that has carried more than 80,000 riders in the past 12 months. Powered by Via and operated in partnership with one of Brazil’s largest transit companies, HP Transportes Coletivos, CityBus 2.0 is responsible for eliminating more than 64 tons of CO2 emissions, and is now targeting other Latin American cities including Fortaleza who are interested in replicating the project.

CityBus 2.0 initially had a trial period with 15 minibuses that covered 11 neighborhoods in the center of the capital. Last July, the service expanded to another 13 neighbourhoods, covering approximately 41 sq km, and in November, another five neighbourhoods were added to the service zone, covering a 43-sq km area of Goiânia.

In its first year, the CityBus 2.0 fleet of 40 vehicles covered more than a million km, and during this period the service removed 6,500 vehicles from the streets of the capital Goiás, according to a survey conducted by the National University of Brasilia.

“Because it’s a shared service, the customer just has to travel a few metres to wait for their pickup, which ensures faster travel on more optimised routes,” said Hugo Santana, director of transportation at HP Transportes. “During the day, it is just a few steps, sometimes less than the usual walk between our parked car and final destination. And at night, we still strive to reduce the walk to improve passenger safety.”

CityBus 2.0 has 80,000 registered mobile customers on iOS and Android, with the app achieving a 4.8 star review. The best rated aspects include driver conduct, which remains in first place, comfort and cleanliness of the minibuses, and stops/routing. Overall, 98 per cent of customers recommend the service.