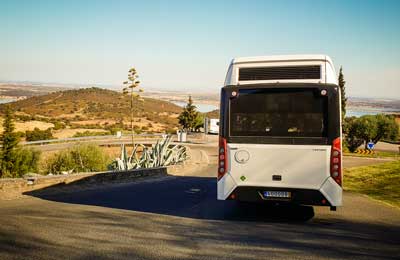 Completely emission-free, the two-door H2. City Gold will be equipped with a Toyota fuel cell system, offering a vehicle range of 400km on a single refill. The power supply components, including hydrogen tanks, batteries and fuel cell stack, are placed on the roof.

“The order is an important step for realising Germany’s largest green hydrogen mobility project eFarm,” says Ove Petersen, CEO of GP Joule, which is developing the scheme. “The cooperative project, in which 20 regional partners are involved, including citizen wind and solar parks as well as public utilities, was initiated in 2017. A joint hydrogen infrastructure from production and processing to fleet deployment is being developed. Citizens and companies who want to purchase a hydrogen vehicle thus receive supply security for 100 per cent green, regionally-generated hydrogen from wind power.

“With Caetanobus, we are pleased to have found a reliable and future-oriented partner who has convinced us from the start with its innovative buses, technology and attractive design.”