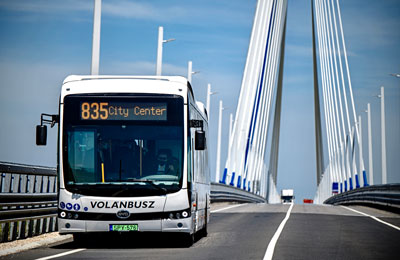 Volánbusz has previously taken delivery of two 12m eBuses, one of which was delivered to Salgótarján in 2018, and the other to Komárom in 2021, where it introduced cross-border electric bus services across the Danube River to neighbouring Komárno in Slovakia, for the first time.

Volánbusz launched its vehicle renewal programme in 2018, and has already replaced more than 860 vehicles, and has a strategy to replace 40 per cent of its total bus fleet by the end of 2022, including further plans to invest in electric buses and charging infrastructure.

All 48 eBuses on order will be built locally in BYD’s European manufacturing facility in Komárom, Hungary. In 2021, the factory increased production capacity, accelerating annual output of a single shift to 400 electric buses.

The eBuses on order feature a new generation BYD iron-phosphate battery with 343kWh capacity to deliver a 300km driving range on a single charge.