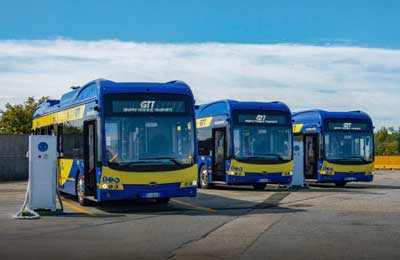 BYD has secured one of the largest orders for eBuses in Italy and the largest eBus order in Turin with  a further 50 of its 12m model for Gruppo Torinese Trasporti. A framework agreement is in place for the supply of an additional 50 BYD 12m models after the initial deliveries are completed and in operation.

The first BYD eBuses were supplied to the city in 2017 and the delivery of 50 eBuses will be GTT’s third intake from BYD taking its total to 78 BYD vehicles. The latest fleet will feature three-door bodywork with delivery of the remainder by September.

Over 60 BYD eBuses are presently in operation throughout Italy, performing on intensive routes in Turin, Novara, Alessandria, Milan, Padua and Messina, and other smaller towns.

The majority of the vehicles will be built in the EU at BYD’s dedicated production facility in Komárom in Hungary.

“Since the beginning of our electoral mandate, we have considered it essential to renew the GTT fleet,” says mayor of Turin Chiara Appendino, “and we have managed to lower the average age of three years.”