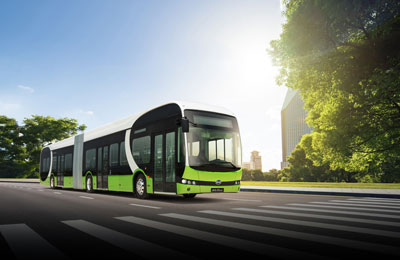 The buses on order are scheduled for delivery to Sant Cugat de Vallès towards the end of 2022 in a project financed by the Regional Railway System of Catalonia (FGC). The 18m buses accommodate 110 passengers and have a 478kWh battery capacity to deliver a 300 km range.

BYD has now delivered, or has on order, over 110 eBuses to public transport operators across Spain, which it says have so far completed in excess of 7.6 million electric kilometres, reducing CO2 emissions by 8,000 tonnes.”

Joaquín Bellido, BYD Iberia eBus sales director, said: “We are delighted to receive our first order from Moventis, made especially noteworthy as it is the first ever order for 18-metre articulated eBuses in the Iberian region.

“These eBuses will provide zero-emission transport services for local people, in a busy commuter hotspot, prompting the net-zero decarbonisation process within Iberia.”