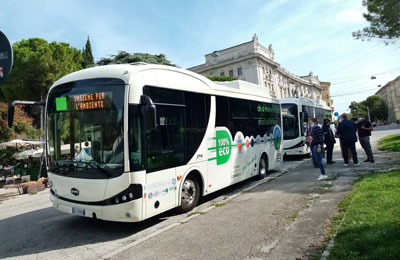 BYD has made its first delivery of two electric Midi eBuses in Ancona, the capital of the Marche Region in Italy. The two eBuses will be operated by Conerobus, which will directly own one of the vehicles.

The first eBus order for BYD from Ancona, this will also be the first fully electric bus to operate in the Marche Region.

Mayor of Ancona, Valeria Mancinelli, says: “The administration places sustainability policies very high on our agenda. Progress is built over time and today we have achieved a positive step forward.

“Over the years we have developed a system that has provided us with increasingly green public transport. We have a series of projects that will allow us to further strengthen the sustainability of city mobility, while supporting modernisation and functional intermodality. These factors combined will lead to a healthier environment and provide an even better way of experiencing the city.”

President and CEO of Conerobus, Muzio Papaveri adds: “We have long been committed to building ever more sustainable public transport. The new electric vehicles are just the latest in a series of initiatives enabling us to deliver a service devoted to innovation with low environmental impact. The new trolleybus and electric buses represent the final phase of a larger project focusing on energy transition.”

BYD Europe managing director, Isbrand Ho adds: “We are delighted that Ancona has taken delivery of its first electric buses. Our eBuses have an ever-increasing presence in cities across Europe and this latest delivery to Ancona is a result of our close and long-established partnership with local public transport operators and authorities.”

Over 100 BYD eBuses are currently on order or in operation throughout Italy, including the cities of Turin, Novara, Alessandria, Milan, Padua and Messina, as well as other smaller towns.