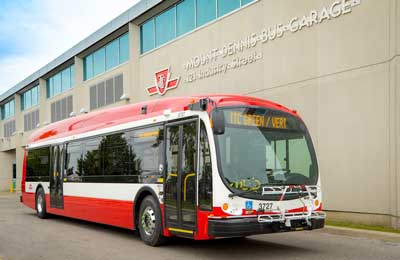 Ten 40-foot BYD K9M battery-electric buses are being put into service by the Toronto Transit Commission, Canada’s largest and North America’s third largest transit operator. The ten buses are the first to be delivered from BYD’s 45,000 sq ft assembly facility in Newmarket, Ontario.

“This is an important milestone for the city, for the province and BYD, and we can’t wait for Torontonians to see what BYD’s combination of best-in-class technology, and Canadian know-how can deliver for their city,” says BYD Canada vice president Ted Dowling.

“Beyond the jobs they create, these ten buses delivered to Toronto will help remove nearly 8,400 metric tonnes of GHG from the atmosphere over their lifetime.”