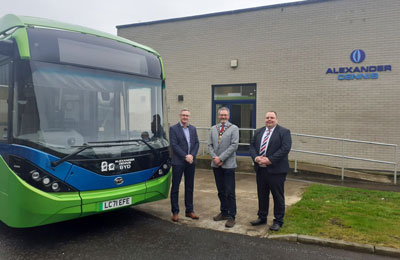 Alexander Dennis and BYD report positive reviews of a single deck electric bus demonstrator which was shown to authorities, operators and stakeholders in Ireland and Northern Ireland.

The BYD ADL Enviro200EV demonstrator visited Dublin Bus and Bus Éireann, allowing staff to familiarise themselves with the type before the operators’ forthcoming delivery of 45 similar buses as part of a framework agreement between ADL and the National Transport Authority.

The bus then visited Northern Ireland operator Translink for an inspection at ADL’s Ballymena office, where Mid & East Antrim Mayor, William McCaughey had the opportunity to explore the zero emission bus.

Mayor McCaughey says: “Antrim aims to become the Cleantech hub for Northern Ireland, and the investment in innovation by key industry players in our borough such as ADL, our focus and support for hydrogen via the newly launched Hydrogen Training Academy and our plans for the i4C Innovation and Cleantech Centre are supporting our journey to net zero carbon.”

David McCaughey, contracts manager, ADL, adds: “Throughout its stay in Ireland, the feedback on our electric bus has been extremely positive. With its world-class technology backed up by our local expertise and aftermarket support, the BYD ADL Enviro200EV has a great role to play in delivering a cleaner future for everyone.”