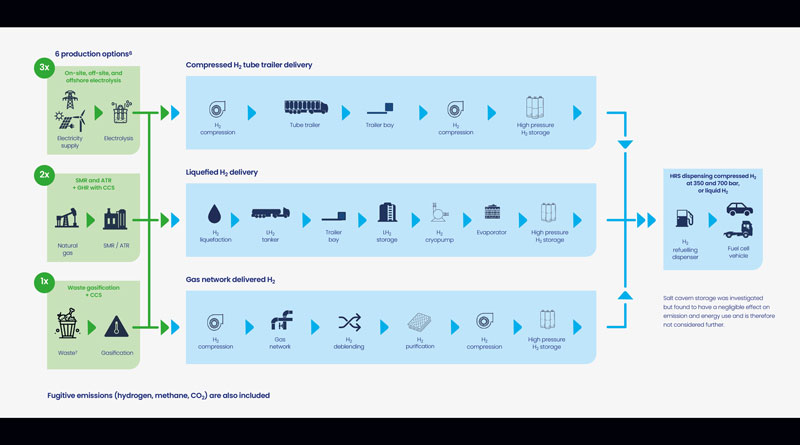 A new well-to-wheel analysis uncovers challenges for hydrogen-fuelled vehicles and recommends that lifecycle emissions need to be considered alongside tailpipe emissions.

With a significant head of steam building behind the promotion of hydrogen for transport applications, a timely report by the Zemo Partnership demonstrates that the climate gains may not be as easily achieved as some of the hydrogen proponents claim. There is already a healthy debate about the merits of ‘green’ and ‘blue’ hydrogen focusing on the production of the fuel itself, but extensive modelling by Zemo looks in more detail at the evidence for in-use application for GHG mitigation potential of hydrogen, compared to battery electric transport solutions.

The new study by Zemo looks at the comparative performance of hydrogen as a fuel and recommends that UK government policy should increase its focus on well-to-wheel (WTW) greenhouse gas  emissions and overall energy efficiency performance of new fuels for transport. While much of the report looks at HGV application, it is very relevant to buses, and especially coaches.

The study argues that while hydrogen, electric and renewable fuels (produced from waste-based feedstocks) can all radically cut emissions compared with their diesel-powered counterparts, there are major variations in their effectiveness and efficiency in terms of cutting emissions depending on choices made over the full well-to-wheel life cycle.

Zemo warns that a focus solely on mitigating tailpipe emissions can risk neglecting the full impacts and the overall energy consumption of the system.

The new study looks specifically at hydrogen, extending analysis provided in its recently published Low Carbon Hydrogen Well-to-Tank Pathways Study. The latest research follows the publication of the government’s UK hydrogen strategy, and demonstrates some of the challenges associated with hydrogen.

The analysis finds that hydrogen vehicles can deliver lower carbon, and in some cases negative, well-to-wheel GHG emissions solutions within the next decade for many vehicle types, but to do this, it is essential to use low carbon hydrogen. And, regardless of how low carbon hydrogen is supplied, the production process is energy intensive and thus significantly worsens the overall WTW energy efficiency.

The research found that the well-to-wheel energy efficiency of hydrogen vehicles is lower than diesel internal combustion (IC) or battery electric vehicles and those using renewable fuels in IC engines.

In the case of HGVs powered by hydrogen fuel cells – widely mooted as a potential hydrogen solution because of the technical challenges to battery electrification, the well-to-wheel energy efficiency is four to six times worse than that for comparable battery electric vehicles.

Zemo Partnership chief executive Andy Eastlake says: “When we look at the energy efficiency of potential pathways for hydrogen to be used in transport we see challenges. These vehicles will need to demonstrate considerable complementary benefits such as longer range, superior payload or lower operating costs to compensate for the increase in energy consumption compared with other zero emission powertrain solutions such as battery electric vehicles.”

In carrying out the research, more than 250 well-to-wheel scenarios were modelled within a 2020-2035 timeframe to assess the impact on GHG emissions and energy consumption.

The study recommends that further feasibility work needs to be carried out to assess the potential role of hydrogen in the HGV sector, including looking at vehicle payload and capacity, range, refuelling/charging time and infrastructure.