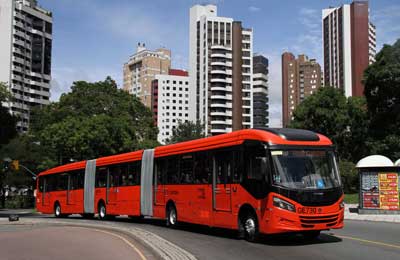 Sao Paulo operator Viação Cidade Sorriso has reported positive results from its earlier purchase of Brazil’s first six Scania bi-articulated buses, which run in the southern city of Curitiba. The buses are 27m-long, have a 250 passenger capacity and feature Allison fully automatic transmissions. These are the first Scanias for a market previously dominated by Volvo.

“The arrival of a new option to the city of Curitiba brings us the flexibility of choice, which is beneficial for both company and users,” says Alaor Morais, operations director, Viação Cidade Sorriso. “The most interesting thing about the Scania/Allison partnership is that we really believe in this new project. We are confident that this is just the beginning of a highly successful project.”

The buses were evaluated over an extended period along the same routes as the incumbent models.

The bi-articulated buses are equipped with a Caio body and 360hp engine with 1,850Nm of torque. The front-engine location increases space for passengers and allows more accessibility between the three bus sections. The vehicles have an 8×2 configuration, with a loading capacity of 43.5tonnes.

Viação Cidade Sorriso has worked with Allison for more than 30 years. The Allison B 516 six-speed fully automatic transmission with retarder is compatible with the high torque of the engine and provides easy maintenance and low operational cost. Its architecture ensures the optimal gear is always selected, as well as generating higher average speeds and reducing travel time.

According to the company, among the advantages of the Scania bi-articulated buses is the ease of mechanical access to the front engine. The new buses work on the North-South line between Santa Cândida and Capão Raso and transport an average of 90,000 passengers per 10-hour day. The new buses are replacing older models at the end of their service life.

“In this initial phase of operation, the bi-articulated buses will be limited to running an average of just 5,500km per month as they are brought on board and we make occasional adjustments,” adds Morais.