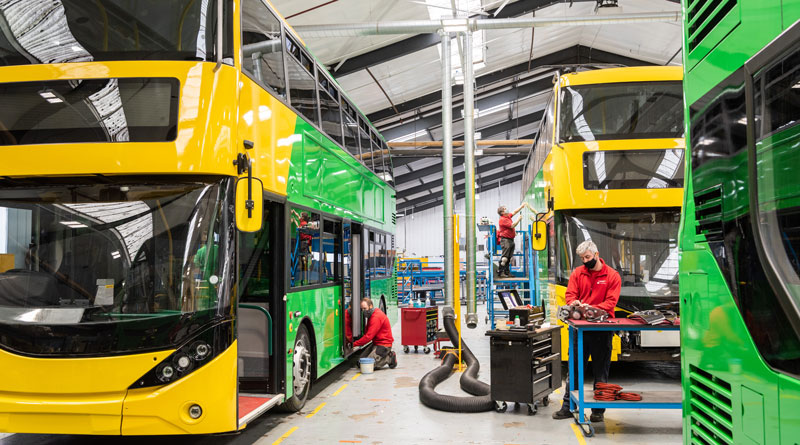 The UK government had its homework marked earlier this year by its key advisory body on climate change  which concluded ‘must do better’. The Climate Change Committee praised the government’s “historic climate promises in the past year” but added “it has been too slow with delivery”.

It is a criticism often levelled at Boris Johnson’s administration and it will be interesting to see similar assessments in a couple of years of the much-awaited Transport Decarbonisation Plan which was finally published in July.

The Climate Change Committee itself has warned that “the devil will be in the detail and we look forward to scrutinising the Government’s proposals fully and carefully”, while welcoming the plan’s ambition to phase out diesel ICEs and promote Net Zero aviation.

There is little new in the specific bus and coach sections of the document which largely rehashes earlier commitments including 4,000 new ZE buses and the all-electric Bus Town which is to be in Coventry. But let’s face it, any major government strategy which has a significant role for buses and coaches has to be welcome.

The headline-grabbing nuggets of the Transport Decarbonisation Plan include a target of phasing out new diesel and petrol HGVs up to 26tonnes by 2035, and those over 26tonnes by 2040. On buses and coaches there are no clear dates with a consultation underway on buses, and one promised at some point for coaches. The delay in setting a consultation date for phasing out diesel coaches is not surprising of course, given the fact that there is still a lot of work to do in delivering technically- and commercially-viable zero emission models. Vehicle range and charging infrastructure are the key considerations for coaches. There are some positive signs however with Van Hool and Proterra promoting their CX45 EV coach in North America which claims a 300mile-plus range, and Yutong’s TCe12 EV coach which can do around 200 miles on a single charge, but there is definitely more work to be done before the sector can realistically commit to a target date for the end of diesel.

The reaction to the government’s plan has been mixed as might be expected; a warm welcome for ambition, alongside scepticism about the lack of detail and solid pathways to deliver that ambition.

The document’s introduction is telling in exposing the government determination to put across a message that the transition to net zero may not be too painful after all. Clearly, it doesn’t want to frighten its voters, but you can’t help feeling that this represents a business-as-usual, ‘Carry on Regardless’ approach.

“We will still fly on holiday, but in more efficient aircraft, using sustainable fuel. We will still drive on improved roads, but increasingly in zero emission cars. We will still have new development, but it won’t force us into high-carbon lifestyles.”

‘Cake … and eat it’ comes to mind when reading this reassuring-sounding message.

An example of the potential conflicts and difficult decisions which lie ahead can be seen by the fact that ‘accelerating modal shift to public and active transport’ comes top of the list of strategic priorities, while the transport secretary also continues to laud the government’s “ambitious roads programme” which of course prioritises provision for car journeys above all else.

There are some big numbers in the plan: £2billion to promote walking and cycling projects, and the previously-announced £3billion of “transformative funding” for buses. But within the Department for Transport’s overall budget there are some even bigger numbers including a £28.8billion roads budget and a £44billion-and-counting sum for HS2, which admittedly will create an electric rail route, but its carbon budget is unlikely to be balanced for decades with a very significant impact on biodiversity during the construction phase.

Reaction to the plan from organisations representing operators and passengers is mixed.

The need to rebalance spending commitments is a key criticism of the plan from Better Transport which says: “What this plan does lack is any concrete measures to rebalance transport spending away from road building and towards more sustainable modes”.

And CPT calls for a commitment to get people out of their cars and on to buses, backed by a transparent road pricing plan.

Meanwhile, Bus Users points out that while the plan focuses on ‘clean transport’, there is no clear strategy on transforming behaviour which it believes is essential to reduce congestion and encourage people on to more sustainable modes.

Zemo Partnership is less critical, describing the plan as a “greenprint” and a “landmark moment for the UK transport sector” and praising what it asserts is its “wide-ranging and detailed” approach.

Looking ahead to the forthcoming COP26 taking place in Glasgow in November and beyond, decarbonising transport will remain a key priority. We look forward to marking the government and the industry’s homework over the coming years to see how the reality pans out compared to the plan’s targets.