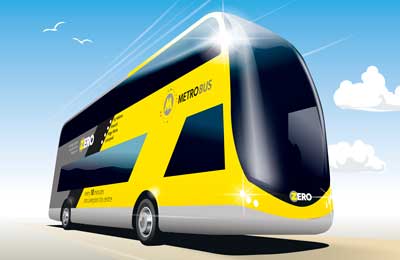 Liverpool City Region is considering an additional funding bid to double its planned hydrogen bus fleet from 20 to 40 double-decks.

Funding is already in place to acquire 20 double-deck hydrogen buses to initially serve the city region’s busiest route – the 10A between St Helens and Liverpool city centre.

A proposed bid for extra funding was agreed by the Combined Authority  on 4 June that could see the hydrogen bus fleet increased to 40 vehicles – enough to fully service the route.

Funding towards the additional hydrogen buses would come via a bid to the government’s Zero Emission Bus Regional Area scheme (ZEBRA).

If successful, the ZEBRA funding would cover up to 75 per cent of the cost difference between the hydrogen vehicles and a standard bus.

Procurement has started for the city region’s hydrogen buses that are due to go into service next year.

Metro mayor Steve Rotheram has set a target for the Liverpool City Region to become net zero carbon by 2040.

“My plans to deliver a London-style transport system that is quick, cheap and reliable, and a Green Industrial Revolution that tackles the climate crisis while doubling the number of green jobs in the region, were overwhelmingly endorsed by people in every part of our area,” says Rotheram.

“82% of all public transport journeys in our region are taken by bus and this new fleet will give people a clean, green and comfortable way to get about. I’m already working to double the size of the fleet so more people can enjoy these buses and the improved air quality we’ll get as a result.”