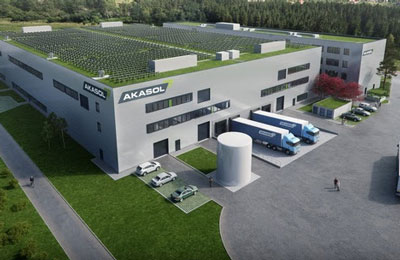 Akasol is investing in fully automated production lines for its high-energy battery modules produced at the Gigafactory 1 at its new Darmstadt campus. It aims to invest up to €29million, and the move also includes production lines for the company’s new US site in Hazel Park, Michigan.

Akasol says the investment follows a serial order from a leading international commercial vehicle manufacturer in the summer of 2019 for the supply of ultra-high-energy battery systems worth in “the high three-digit million euro range”, and new production capacities are now being built up as planned, enabling serial production to start in the new Gigafactory 1 south of Darmstadt by the middle of 2021. The new ultra-high-energy AKASystem AKM CYC battery systems will be manufactured at this location. These units achieve improved energy density compared to current systems, enabling vehicle ranges of up to 600-800km in full-electric buses and commercial vehicles, depending on the vehicle type and driving profile.

“With a total capacity of up to 5GWh in the new Gigafactory 1 in Darmstadt, Akasol is well positioned to be able to deliver the quantities agreed with our serial customer in the coming years,” says Sven Schulz, CEO. “In addition, the new Gigafactory 1 will be an important basis for the further expansion of our production capacities in North America, where we will install Gigafactory 2 with almost identical production equipment from the beginning of 2022.”

In addition to the expansion of new production capacities, Akasol’s new headquarters will have a test and validation centre as well as an administration building and space for up to 500 workplaces on a 20,000 sq m site next to Gigafactory 1.