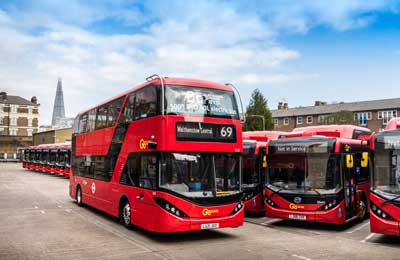 BYD UK and Alexander Dennis Limited report that their electric vehicle partnership has handed over its 500th electric bus. The zero emission double-deck has joined the fleet of the partnership’s launch customer, Go-Ahead London, as orders for the next 500 BYD ADL electric buses have already been confirmed for public transport operators across the UK.

Having entered a partnership agreement in October 2015, the partnership delivered its first buses the following summer.

The 500th bus is an Enviro400EV and is one of 20 that have joined the Go-Ahead London fleet for route 69 between Walthamstow and Canning Town.

Go-Ahead London has worked closely with the BYD ADL partnership since its inception, becoming its launch customer in 2016 and continuing to support product development with its operational experience.

Frank Thorpe, managing director, BYD UK, says: “We were delighted in 2015 when Go-Ahead London embarked upon their journey towards electrification with us, and we’re even more thrilled today as we celebrate the handover of the 500th BYD ADL electric bus.

“It’s a very significant milestone, and not only for the BYD ADL partnership. It demonstrates clearly the commitment of the nation’s capital to decarbonisation, with eMobility playing an increasingly fundamental role in delivering a cleaner transport system for millions of people.”