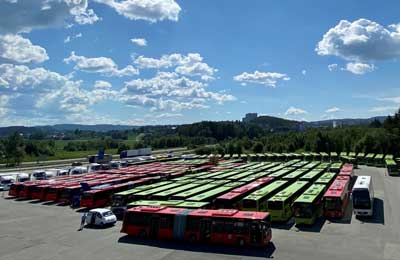 The first buses were delivered at the end of June and the balance of the order is now starting operations in Oslo.

“We are delighted that Unibuss has decided to put so much trust in us,” says Rudi Kuchta, head of business unit bus, MAN Truck & Bus. “The buses will be powered with HVO biofuel. This will make them the perfect fit for this progressive, green region.

The buses will be deployed in and around the city of Oslo, including Vestre Aker, a district in the north-west of Oslo, Nesøya, a small island in the municipality of Asker, and Bærum, a municipality in the Norwegian county of Viken.

“We are impressed that the buses were delivered on schedule despite the fact that factories were closed due to the coronavirus pandemic,” says Øystein Svendsen, CEO, Unibuss.

“The MAN Lion’s City buses that are operating in Bærum are turning heads, largely on account of their impressive capacity. After all, these articulated buses are difficult to miss given their size and their striking red colour.”

Each of the articulated, low-floor buses is powered by a D2066 LUH diesel engine. MAN Truck & Bus also handed over 33 MAN Lion’s City LE buses to Unibuss. These 12-m-long buses can seat 43 passengers and are powered by a 290hp D0836 LOH diesel engine, which also runs on HVO biofuel.

Opting for HVO biofuel over conventional diesel will lower emissions by up to 90 per cent,” adds Svendsen.